Magazine for ports, shipping and logistics
Specialist skills and the ability to improvise are helpful
Behind the Scenes

If you‘re doing business in North Africa, remember the continent is a collection of individual countries, each with its own customs and culture. So it pays to do your homework.

Karsten Lange, who handled North African business for a Bremen shipping company for many years and was a frequent visitor to the region, sums up the basic requirements for doing business there. „First of all, you have to build up a relationship of trust with your trading partner and maintain it. This doesn‘t happen overnight and certainly not just with emails, phone calls and video conferences.“ You have to show up in person on site regularly and spend as much time there as possible. „Arabs are usually quite distant at first and take longer to get to know you than westerners,“ says Lange.

For business travellers from Europe, this means being patient and holding back early on. Politics and religion are not suitable for the initial stages of the relationship. „Football is almost always a good topic to start with. It brings people together and is very popular in North Africa,“ says Lange. Volker Kröning, Honorary Consul of Morocco, agrees. „A conversation about the African Champions League is possibly a good introduction. Since 2017, the finals have all been North African teams.“ At the same time, he recommends studying the history and culture of each country in advance. „Differences matter as much as similarities. Those who are familiar with both are best equipped to shape business relationships productively,“ says Kröning.

„You have the watches. We have the time“

Both these North Africa experts also point out that the clocks in the Maghreb tick differently than in Europe (Arab proverb: „You have the watches. We have the time“). There are often more important things for people there than keeping to exact time slots. Statements like „He‘ll be back in an hour“ or „Come back tomorrow“ shouldn‘t be taken at face value. Kröning points out that punctuality is expected of German companies, „but it‘s clearly a one-way street, because it is rarely kept to by the locals in return.“ Lange advises against scheduling several appointments in quick succession. „Even the first appointment can cause delays that will make subsequent appointments run late,“ says the ex-shipowner manager. Against this background, he also recommends cultural sensitivity. Meetings in the region could well be interrupted several times a day due to prayers. Scheduling meetings during Ramadan may not be advisable, as the hosts might have limited energy due to fasting.

Once the meeting has begun, be respectful, pay attention to non-verbal signals and read between the lines. „Politeness and form are more stringent there than in Germany. You need to act diplomatically and respectfully,“ says Kröning. „You will never hear an unequivocal ‚No‘ in the Maghreb, because it‘s considered rude,“ says Lange. In the event of a rejection, the people in charge usually talk around things or don‘t even bring up the issue at all. Everything that is not answered with a clear ‚Yes‘ is considered rejected.  „No matter how the issue develops in the course of the conversation, they are always careful to ensure that none of those involved lose face,“ says Kröning.

The two Bremeners also agree that it takes a fair amount of improvisational talent to master the unique challenges on the ground, which are not limited to unclear time slots, unfamiliar conversation structures or indirectly communicated refusals. „But even this talent is only of limited help if it‘s not backed up by the appropriate expertise. The right mix of both is crucial,“ says Lange. Job titles on business cards are important. „In North Africa, the exchange of business cards is not as ceremonial as it is in Asia, but here too titles and hierarchies are important. If your title is less senior than managing director, you can only make a very limited difference in the Maghreb,“ says Lange. The beauty of North Africa, however, is that once trust has been acquired there, it is automatically passed on to the next generation, even in the case of business partners. „Due to strong Arab family structures, this trust bonus is virtually hereditary. It‘s one of the nice things about doing business there.“ (bre) 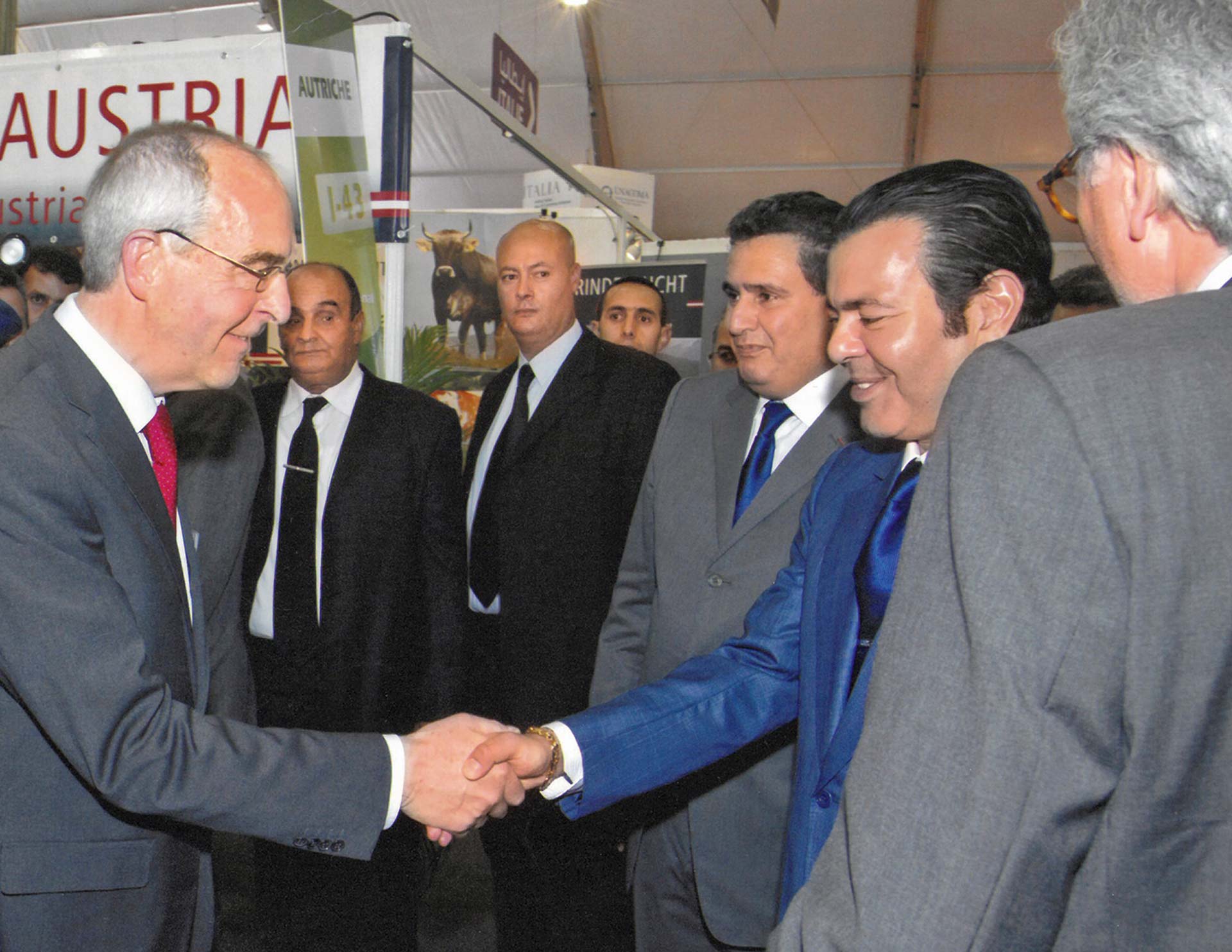 Honorary Consul Volker Kröning (2nd from left) exchanged views with Prince Moulay Rachid of Morocco (2nd from right) at the SIAM agricultural fair in Meknès in 2012. 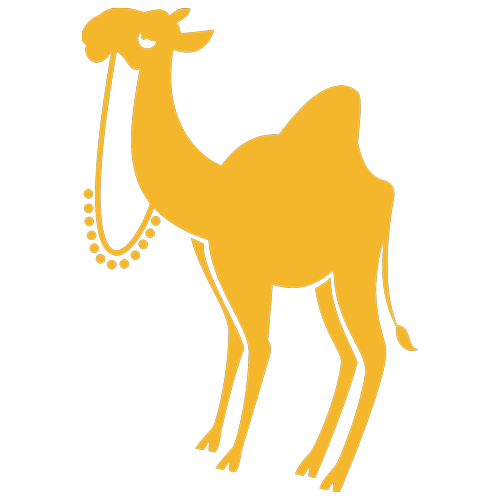 Interview with Jochen Tholen, PhD, of the University of Bremen on the Arab Spring.

In December 2010/early 2011, there was a series of protests and uprisings in the Arab region that have gone down in history as the Arab Spring, in the course of which several rulers were ousted. But what have these revolutions actually achieved? 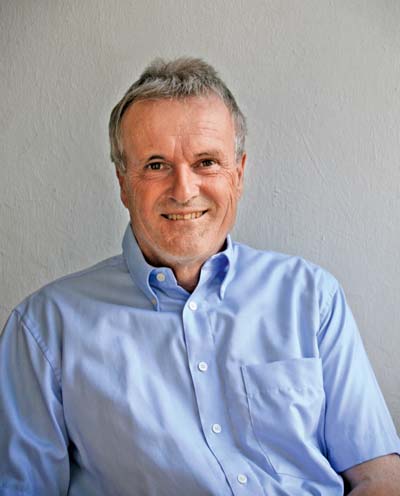 teaches at the University of Bremen, focusing on the maritime sector (especially shipbuilding/shipyards and deep-sea mining) and transition societies (Central-Eastern Europe and countries of the former Soviet Union and the Arab region). He also led the EU-funded research project SAHWA, which focused on young people‘s experience of, and disappointment with, the Arab Spring from 2014 to 2017.

It was a revolt, especially by young people, against the lack of opportunities for political, economic and social inclusion. Hundreds of thousands protested against dictators and autocratic rulers. The protesters demanded social justice, freedom and dignity. But the authoritarian regimes in the region were quick to repress them, bolstering their security forces and learning from one another the techniques of repression. The few cosmetic reforms that were granted were always accompanied by preventive measures to guard against further unrest. Today, authoritarian states and repressive systems still dominate the region. The military regime in Egypt and the Gulf monarchies have led the counter-revolution. In Syria, Yemen and Libya, the Arab Spring has ended in fiasco with civil wars and mass emigration.

Ten years on, what are the main societal challenges in the region?
THOLEN: Mainly demographic change and social and economic injustice. In 1970, there were 128 million people living in the Arab region. By 2010 there were almost 360 million. According to UN forecasts, by 2050, it could be almost 600 million. This would be a fivefold increase in population In less than a century. Rising population numbers bring problems such as water shortages, high unemployment and, above all, a lack of economic prospects for young people. Another problem is the Arab variety of clientelism, called wasta. Only by cultivating a relationship with political and economic elites can one have a career that allows one to feed the family and lead a life worth living. The tentacles of the wasta system reach far into the functioning of state-owned enterprises, the civil service and the military. It leads to a small stratum of the population doing very well, but overall to economic stagnation and a lack of international competitiveness.

Some people think these countries are worse off now than they were eleven years ago. Is that a view you share?
THOLEN: Hopes for a political turning point have not yet been fulfilled. Only in Tunisia has a fragile democracy emerged, but in some places conditions are worse than before. In this respect, the Arab Spring has hardly fulfilled any of the expectations associated with it. That is why, on the one hand, it can be described as a failed revolution, but on the other hand, it has shown for the first time that many people in the Arab world were also prepared to take to the streets for their rights, to abolish despotism and to demand far-reaching reforms.

Some say that the majority of Arabs believe that western-style democracy is the best form of government? Do you think there is a realistic chance of that happening
THOLEN: Western-style liberal democracy is not necessarily seen as the preferred form of government by everyone in the region. But if it were, a genuine transformation in the Arab world have to start with free elections. At least as important would be the development of an organised civil society, a change in gender relations and a clear separation of state and religion. But I think that all this happening together is rather unrealistic, especially since many people in North Africa have lost faith in politics and democracy. (bre)