Magazine for ports, shipping and logistics
Logistics for tuk-tuks
Portrait

The globally active logistics service provider BLG LOGISTICS has been present on the Indian market for a decade through the joint venture BLG Parekh Logistics. There, it’s all about two- and three-wheelers.

BLG Parekh Logistics handles 60 percent of the partial assembly of all tuk-tuks produced globally. This includes for instance the assembly of the dashboard, half of the engine, the wheels, the roofs and the seats.

Two strong partners came together for this Indian joint venture. One is the BLG LOGISTICS GROUP, whose roots stretch back to 1877 and which is now active in twelve countries. The other is the Parekh Group, which can look back on 60 years of history as a conglomerate with diversified interests including services pertaining to shipping, handling of large transports and contract logistics, as well as in the catering business. The two principals each have a 50 percent stake in BLG Parekh Logistics.
Since its foundation in 2008, the joint venture has grown into a leading provider of customer-specific contract logistics solutions and is specialised in services related to vehicles, especially two-wheeled and three-wheeled vehicles like tuk-tuks. The company is headquartered in Mumbai, the capital of the federal state of Maharashtra in western India. The densely populated metropolis of 23 million is a financial centre and also an important transport node with its ports, motorways, long-distance bus stations and port, air and rail connections.

Aurangabad is a key centre of the two-wheeler industry

The company is also represented at three further sites with some 1,000 employees: Aurangabad, Chakan near Pune and Chennai. “The majority of our operational business originates in Aurangabad in the west Indian state of Maharashtra”, reports Vijay Raut, who has been working as Key Account Manager for BLG Parekh Logistics for ten years; he was one of the first employees of the fledgling organisation. The three locations were not selected at random. The western Indian city of Aurangabad is the home of major companies in the car and two-wheeled vehicle industry. 50 kilometres from the district capital of Pune, in Chakan, there also lies a larger industrial area focused on automobiles. And in Chennai on India’s southern coast one finds the country’s second-largest port, and many large automobile manufacturers have factories in the capital of the state of Tamil Nadu. Furthermore, around 50 percent of the Indian automotive supplier industry is implanted in the region.

In the three segments warehouse logistics, internal logistics and distribution logistics, the company covers a wide range of needed services. BLG Parekh Logistics handles 60 percent of the partial assembly of all tuk-tuks produced globally. This includes for instance the assembly of the dashboard, half of the engine, the wheels, the roofs and the seats.
Raut reports: “The second-largest Indian motorcycle manufacturer has been our customer for nine years. We have a long-term contract with them. We assemble the parts from OEM suppliers for them.” So far, this mainly happens in Aurangabad, on an area totalling 60,000 square metres, or more than eight football pitches. There are three different setups there, as Raut explains: warehouse logistics and the fulfilment for aftermarket spare parts, packaging for export, and the assembly of a total of 980 parts for 178 components. This includes for example air and oil filters for the engines of three-wheeled vehicles.

Foundation: 2008 as a 50:50 joint venture between BLG LOGISTICS, Germany, and the Parekh Group, India

Other locations: Chakan near Pune, Aurangabad and Chennai 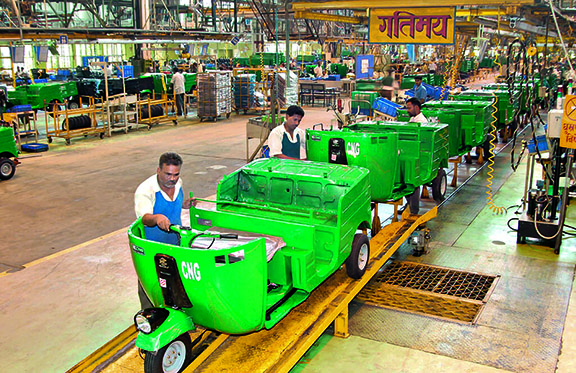 Since financial year 2019, Bajaj Auto from the Indian city of Pune is the largest manufacturer of tuk-tuks worldwide, having built 780,000 of what has become the favourite means of transport in many countries.

“Overall, each month some 400,000 spare parts are handled in the spare parts warehouse, and 60,000 vehicles are assembled”, Anand Devulapalli remarks. He has been Managing Director India at BLG Parekh Logistics since April; prior to that, he collected 20 years of experience amongst others at renowned logistics service providers like DB Schenker, Ceva and Kühne + Nagel as well as at some Indian logistics companies. “Then there is the packaging for 110,000 two-wheelers.” Around 40 percent of the vehicles are destined for the Indian market, the other 60 percent are exported. The major foreign markets are southern Africa, Asia, especially Bangladesh, Malaysia and Sri Lanka, as well as Iran and Egypt. “We know the forecast figures for every country precisely, the customer is very transparent”, Devulapalli emphasises.

“Storage is restricted to eight hours, so that the OEMs can produce just in sequence”, Raut explains. To this end, there are eight exit gates on the site, from which six trucks make their way to the customer every two hours. In total, the site operates 16 hours a day in a two-shift system. And India still has a six-day week: “We work five days and half of Saturday”, says the Key Account Manager. Raut reports that in Chakan the company is also currently constructing a similar area as in Aurangabad, with 8,000 square metres. Devulapalli adds: “In the meantime we had to stop operations in Chennai because of the pandemic”.

The collaboration with the large client, with a renewable contract term of three years, is naturally designed to be very close and cooperative. “We obtain a sales forecast each month”, the Managing Director explains; “of course we have to react to this very flexibly”. The forecast volumes were lower for the months of April, May and June due to the pandemic and dropped by some 20 percent during the 21-day lockdown in March. “But then some 85 percent of employees resumed their work at the vehicle manufacturers within two to three weeks”, Devulapalli reports. “Since mid-August we are back to 100% – with lots of dynamism”. However, the rising infection rate means that renewed restrictions remain a possibility. “But I think these will mostly be on the weekend, as the Indian government will do everything it can to prevent a second true lockdown”.
Regardless of the coronavirus, the Indo-German logistics company has set itself an ambitious goal: to become the leading provider of customer-specific contract logistics solutions in India. (cb)