Magazine for ports, shipping and logistics
When every word counts
Behind the Scenes | Logistics World

In business, we Germans often talk a lot and talk quickly. This is one of several characteristics that do not always go down well in Scandinavia, land of ‘jante’ and ‘hygge’.

Photos: Anita Jeanine Photography/Unsplash, Chones/Shutterstock, Campaign Creators/Unsplash, Steiert
In terms of kilometres, Scandinavia is not nearly as far away from Germany as South Africa or China. “But in some ways, light years separate us from the North,” says Dr. Liane Steiert, trainer for intercultural cooperation, based on her years of experience and numerous stays in the region. Even between Sweden, Norway, Denmark and Finland, there are sometimes considerable differences that need to be kept in mind if you don’t want to slip up in business or be dumped straight into the ‘typical German’ category. “The Scandinavians are at least as different and multi-faceted as people in the German-speaking region. Here too one should never lump Germans, Austrians and Swiss together,” says Steiert.

In Sweden, the jantelagen (law of the jante) applies. This is a social code of conduct that reflects the Swedish way of social equality and makes it almost impossible for people to be intrusive or to put themselves in the limelight. “This kind of modesty applies to a certain degree to all Scandinavian countries. The principle of equality also means that professional life is much less characterised by visible hierarchies than in Germany,” says Steiert. Against this background, the Scandinavians do not appreciate it if someone acts like the proverbial “pike in a carp pond” and thinks he has a monopoly on the truth. From Gedser Odde to the North Cape, agreement and consensus are reached mainly through protracted discussion. “Many Germans therefore tend to say that the people in the Northern countries are conflict-averse. I don’t think that’s true. They simply have a different way of dealing with conflicts and different views,” says Steiert.

She calls the Swedes the “world champions of long-term consensus building”. In Sweden, everyone in the discussion has a say. This also applies to the Danes and Norwegians, although the Norwegians in particular like to speak in short sentences, calmly and slowly. Therefore, like many Scandinavians, they perceive a fast, excited way of speaking, as we Germans often speak, as negative. This applies even more to the Finns. “The Finns generally don’t talk much, but every word counts, and it is always chosen with care,”says Steiert. At the same time, it is not uncommon in the land of a thousand lakes for business relationships to be established outside the office in a restaurant or sauna. This is very different from Sweden and Denmark, where guests look after themselves after work, apart from maybe a delicious dinner, because the hosts retreat into the circle of their families. “The conclusion that Scandinavians work less because they leave work early is not appropriate, however. With a healthy life balance, they can be reached via email after office hours and do some work in the evening, perhaps when the children are in bed,” says Steiert. 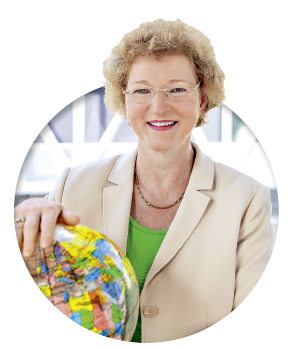 „The Scandics tend not to provide loads of information.“

The Scandinavians are good conversational partners in business talk, but have a different way of dealing with different views than Germans do. Punctuality is also very important to them.

The Danes are real family people, for whom happy coexistence is very important. Their attitude to life is described by the term ‘hygge’, which means cosy or comfortable. Since strangers are often called ‘uhyggelig’, the Danes rarely invite them home. In the North, people greet each other, both privately and in business, in a very relaxed manner, with a handshake and first- name terms. This even applies between journalists and politicians. “As a German visitor, this can be quite irritating at first,” says Steiert. It is helpful to know that respect is not expressed by the use of the surname, but by appropriate behaviour. The dress code in Scandinavian offices is similarly casual. Wearing ties is rather unusual here, but this changes when it comes to business dinners or family celebrations. In all four countries, great importance is attached to a stylish appearance, and men like to wear a tie on such occasions. And no matter where and with whom a meeting is about to take place, punctuality is highly valued in the Nordic countries: making someone wait is considered rude. The same applies to taking up the time of a business partner beyond the agreed appointment time. This kind of rudeness is said to be very common in Northern Europe, especially among Germans. In Scandinavia, where due to the aforementioned principle of equality business titles are not considered very important, business cards are often exchanged without much formality.

Looking at the situation as a whole, Steiert raises some concerns: “Anyone who operates in Scandinavia in the same way as in Germany shouldn’t be surprised if things don’t go to plan. The key question is: What do I want to achieve?” She recommends listening carefully and asking the right questions. “The Germans are not a nation of questioners, but rather a nation of knowledgeable people. This doesn’t go down well in Scandinavia.” For business correspondence, she also advises not just asking for facts and figures, but saying explicitly what they are needed for. “Scandinavians tend not to provide a cornucopia of information,” she explains. However, if this attitude, and the Scandinavian peculiarities mentioned above, are taken into account, the chances are that business with our Nordic neighbours will work out just fine. (bre)